The CHAAL Permit is located onshore, in central Tunisia, 60 km to the West of SFAX city. The Permit covers approximately 1,200 km2, in an area of good infrastructure. Major highways cross the permit, and both oil and gas pipelines are very close.

The shareholders on CHAAL Permit are:

The Ali Ben Khalifa discovery well ABK-1 was drilled in 1963 as an exploration well targeting oil. Gas was tested in the Jurassic Lower Nara formation at a depth of approximately 4,000 m rates up to 3 MMScf/d plus condensate at 25 – 80 bbl/MMScf.

An appraisal well ABK-2 was drilled in 1965, which also encountered gas shows over the same stratigraphic interval, but was not tested. The discovery has never been fully evaluated, and flow rates from the original tests are thought to be compromised by formation damage due to the drilling program and high mud weights.

SMIP and its joint venture partner CANDAX signed, in April 2005, with the Tunisian Government and ETAP the CHAAL Permit under a PSA (Production Sharing Agreement). 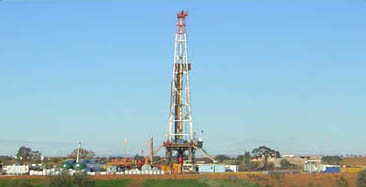 Two tests have been conducted and although modest levels of hydrocarbons were flowed, both tests have been significantly affected by damage to the exposed well bore due to high mud weights used to control the well during the drilling.

The well flowed high quality of gas with condensate in non commercial rates.

Technical review with Partners is underway for further appraisal options.